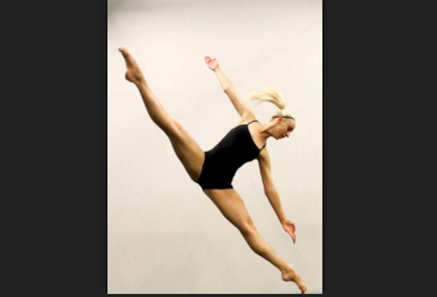 Dancer will find her feet in London

Dacia Biletnikoff is fond of a particular catch phrase: “Training is the opposite of hoping.” The mantra drives the 18-year-old, who spends about 20 hours a week practicing dance. While at Granite Bay High School — she graduated in May — this meant four or five hours of training after school every day. She has lived this strenuous schedule for the past five years, attending rehearsals at the prestigious Northern California Dance Conservatory in Roseville. “I don’t really complain,” Biletnikoff says. “I love dance. I’m obsessed. I think you have to be obsessed to get to this level. Sometimes, I get tired. But it’s never that I don’t want to go dance.” When Biletnikoff — a pretty woman with long blond hair and big green eyes — talks about her fondness for dance and choreography, and her plans for the future, she smiles widely. Those plans include summer performances in Austria and New York, and college at the London Contemporary Dance School this fall. When she reflects on the death of her older sister, Tracey Biletnikoff, who was murdered in 1999, her smiles fade and she strings together articulate thoughts in one, long breathless sentence. But she always stays positive. “What I got out of it, is when you have something you want, really go for it,” Dacia Biletnikoff says. That’s exactly what she has done. As a 5-year-old, Dacia’s Biletnikoff’s best friend took dance lessons, so she asked her parents, Angela and NFL Hall of Famer Fred Biletnikoff, if she could, too. Growing up, she also played soccer, violin and piano. But at 13 years old, the daughter of the Oakland Raiders’ wide receiver and Super Bowl MVP chose to focus on the delicate art form of dance. For the past eight years, Dacia Biletnikoff has trained at the Northern California Dance Conservatory under the tutelage of renowned instructors, including ballet master Theodore Constant, who has toured all over the world. She studies jazz with Kelly Archer, and practices contemporary and modern dance with the studio’s artistic director Jen Bradford. “(Dacia) has a unique style,” Bradford says. “She has an innate ability to take moves the choreographer gives her and internalize it and produce in her body what the choreographer is looking for.” Part of that style may come from Dacia’s disdain for “sloppy dancers” and her skill at technicalities. “She has a deep passion for dance that comes through,” Bradford says. “Each dancer expresses themselves through movement. Her style is very intricate. Although she has a strong technical base, she has passionate and fluid movements.” Dacia Biletnikoff favors contemporary and modern dance, which incorporate raw, humanized and organic movements. On June 12, she will travel to Austria for 10 days to perform in a festival, where her first choreographed piece will be danced. In July, her six-person company will perform at the Jacob’s Pillow Dance Festival. But her biggest excitement comes later this year when she moves to London. She applied to the college on a whim, and traveled to New York to audition for one of 45 spots out of 1,600 applicants from around the world — a .03 percent acceptance rate. “I, honestly, really didn’t think I had that great a chance of getting in,” Dacia Biletnikoff says. “I’m pretty excited. I was originally going to go to New York because I got accepted to a school there. But when this came up, I couldn’t give it up.” Upon her arrival in mid-September, she will audition to be placed with other dancers. She will take dance classes, a course in biometrics and a course in the Feldenkrais method, designed to improve movement through self-awareness. For the first two years, Dacia Biletnikoff’s coursework will center on skill development and in her third year, she will pick a specialty — choreographic studies. Her mother, who has never missed a performance, is proud yet sad to see her youngest daughter move away. “She’s earned it,” Angela Biletnikoff says. “Nobody gave her anything. We just gave her support.” Before Dacia Biletnikoff leaves, she will celebrate her 19th birthday, nearing the age when her sister Tracey died, strangled at the hands of her boyfriend. Dacia Biletnikoff, who is one of five children, says her sister struggled with drugs and alcohol, but came clean before her death. Dacia Biletnikoff is not a party person, doesn’t do drugs or drink alcohol. “I want to make the right decisions, because I’ve seen the ultimate consequence,” she says. “It’s made me a stronger person, and I want to make sure I define myself in a good way.” A large part of her self-defining involves dancing. One day, she hopes to become a choreographer in New York. “I want to have my own company,” she says. “It’s a big dream, but it’s something I want to do.” But it’s a dream within reach. “Out of all our dancers, and there are 500 of them, all would agree that Dacia has the most kind, open personality,” Bradford says. “I have never known her to come to class angry or upset. She’s just fun. She always has a smile on her face. She’s going to have an incredible career ahead of her.” Sena Christian can be reached at [email protected] ———- EDITOR’S NOTE: This is the first of a three-piece series on young people who overcame great odds to do amazing things. Check out the June 18 issue of the Press Tribune for the second article.