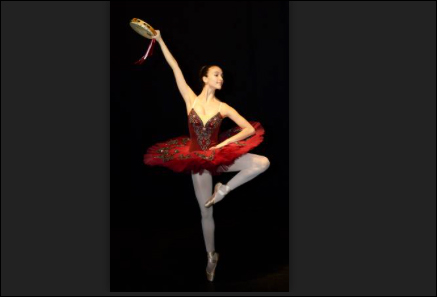 For Tessa Magda it would be her first dance competition. It would also be her first time in France. And it would also be barely two months after she broke her foot.
But none of this seemed to phase the Auburn 15-year-old, as Tessa took home the gold in both the classical ballet and contemporary dance competitions.
“I wasn’t expecting it,” she said. “They say my name funny, so I paused for a second to make sure it was me, but no one else was going up, so I went up and got my medal. I was very happy and very surprised.”
She admits to being nervous, “a little wobbly,” but said it was an extremely good experience for her and helped build her confidence.
“My goodness, I was ecstatic,” said her father, Julius Magda, upon hearing the news. “I practically burst out in tears when I heard how well she did.”
Sure, that’s a proud father talking. So let’s go to the ballet teacher for an objective reaction.
“I am very proud of her,” said Theodore Constant, ballet director at the Northern California Dance Conservatory in Roseville. “She’s been working really hard, since she was 9 years old. It’s been a long road, but we feel very happy.”
The 16th International Ballet Competition in Montpellier, France, consists of three parts. The first two deal with ballet; one common piece that all competitors must do and one of their own choosing. The third is a contemporary dance. For this they chose a violin concert by Philip Glass, choreographed by Constant (that’s his artistic name, his real name’s Constantinescu, but to the students it’s “Mr. C”).
For the ballet, Constant said he set her up in the competition with a piece that would challenge her.
“I had her dance the gypsy, Esmeralda, from The Hunchback of Notre Dame ballet ‘La Esmeralda,’” he said. “She’s a very hot-blooded character. Tessa is still young and innocent. I would see her more as Sleeping Beauty or the Lilac Fairy, but I did that for the competition, to challenge her, and she pulled it off nicely.”
For Tessa, playing the strong, confident Esmeralda was enjoyable, and the gold medal proves it was not beyond her talents. But her favorite ballet is “Giselle,” whose heroine is described as shy and beautiful; and of delicate health due to a weak heart. She may identify with the character’s shyness and beauty, but no one would ever question Tessa’s heart, not after January’s misstep.
“It was just a freak move,” her father said of her broken foot.
It was the first day back to practice after Christmas break. Her teacher said it was a moment of distraction; that it just happens sometimes. But she rehabbed and got her strength back and before long she was back “en point.”
And then it was off to France, where Tessa stayed with a local family in Montpellier. They had two teenage daughters, one of whom was competing as well.
“I was only there a week,” she said. “I was very busy working and didn’t get to see much in the way of sights. But from what I did see, Montpellier was absolutely stunning. There is a lot of history there.”
She found the people very welcoming and the food “absolutely amazing.”
The same can be said of her performance across the pond.
“This was her first competition,” Constant said. “Now she has confidence.”
And thus, Giselle makes way for Esmeralda, a delicate balance for the budding ballerina.